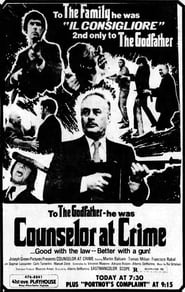 Counselor at Crime (1973) Watch Online - When the godson of San Francisco's crime lord asks permission to leave "the business," Don Antonio agrees, but reluctantly. Such behavior by either one is a violation of the code, and a bloody mob war breaks out. It is only through the strong support of his family connections in Sicily that Don Antonio is able to survive the mêlée and come out on top. Aghast at the situation he has caused, the godson becomes his leader's "consigliere," or Counselor at Crime.